Abbreviated as “Logos” or “LCC”

“Logos” is an independent church established by the American Mission Society (CNEC; now PI-Partner International) between 1969 and 1970.

We worship the Triune God, root in the teachings of the Bible, and in appropriate contemporary context, inherit the doctrine and worship tradition of the holy catholic Church, and align with the Reform Movement and evangelical theology.

“Logos” is an urban church that upholds a convergence worship life and a holistic discipleship training and is dedicated to evangelizing people far and near.

What do we do?

“Logos” shepherds and nurtures groups of all ages to fulfill the Great Commission and to practice the Great Commandment through their respective characteristics of the age!

Disciples who resolve to listen to Christ and deny themselves, and love God and neighbors wholeheartedly, we invite you to labor together with us:

To preach and practice the gospel ~Â  Driven by the love for our neighbors, using all kinds of wisdom and your special creativity, spread the gospel and pastor the church

We invite all the guests to experience together a life of faith, hope and love!

The first stage (1969-1989)
The starting point: Founding and Adventuring 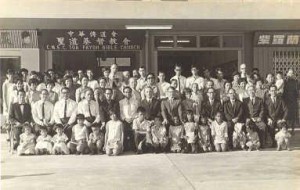 From 1970 to 1984, the church carried out active evangelism to the nearby residents: opened a kindergarten to reach out to children, opened Chinese and Hokkien worship service for adult believers (simultaneous interpretation of Chinese preaching in Hokkien), and also approached young students to start the fellowship ministry for the Chinese-speaking youths.

By 1984, the church had more than 100 people gathering each week, and the premises could not accommodate this continually growing membership, so the deacon board decided to look for a new meeting place.

In May 1987, the land of the current church premises was purchased and the construction work started.

The second stage (1990-2005)
The extending horizon: Consolidating and Advancing 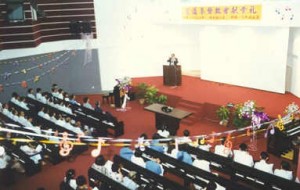 On April 28th 1990, with great excitement, our brothers and sisters moved into the new church building. On that day, we held a short yet solemn dedication ceremony. This building standing in 20 Lorong Ah Soo witnessed the grace of God.

From 1990 to 2005, one after another, the church established ministries for all age groups and different populations: senior citizens, adults, young people, children, and grassroots (Bethlehem Worship).

During this period, those important functions of the church were further extended: pastoring of the fellowships and cell groups (in 1993, the young adult ministry was fully groupnized), establishment of a sisterhood fellowship, establishment of worship and church music ministry (formation of youth choir and childrenâ€™s choir, reform of Chinese Worship, building of worship team and band), inspiration on church ministration, launching of missionary projects (started the annual mission meeting, dispatched short mission team, participated in Chinese training ministry, planted sister church in Kluang, West Malaysia, initiated Chinese immigration ministry), establishment of the community evangelism ministry, and establishment of the cultivation and training ministry (including Sunday school for adults and children).

From 2001 to 2008, we reached out to the Chinese long-term visitors who have stayed for different reasons: such as students, accompanying mothers and professionals, etc., and customized bible study groups and pastoral groups were set up for them.

The third stage (2006-present)
The expanding land: Striving for comprehensiveness and holism 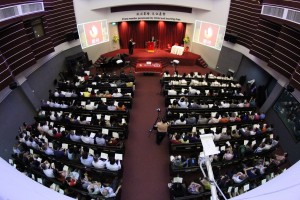 In 2006, Logos Church carried out a second worship reform by adopting a convergence worship model and instilling ritual elements into the worship. Starting from April 2008, the church decided to design the worship and sermon according to the church calendar and scriptures.

In 2008, the Chinese fellowship expanded. In 2009, in collaboration with CNEC to implement the concept of â€œdiaspora missionâ€, a ministry targeting the recent immigrants from inland China formally set forward, with the goal to more actively spread the gospel among this population, care, pastor, nurture, and equip these Chinese brothers and sisters, help them integrate into local and church community, and mobilize them to participate in the church ministration.

As of 2012, there were about 630 brothers and sisters on our membership list, and the average number of gatherings every week reached 450.